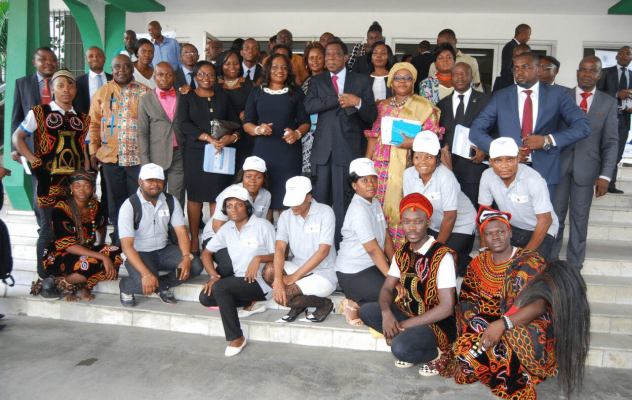 In view of starting the OHADA BUSINESS SCHOOL training sessions (April 2017), the African Business Climate Survey (ABCS) in partnership with the Cameroon Business Forum (CBF) and the financial support of the Ministry of Finance organized a workshop on the appropriation of the OHADA law English speaking judicial and extrajudicial actors.
This strategic program which “complements the action taken by the Ministry of Justice through an Ad Hoc Committee created to address preoccupations relative to the functioning of the justice system raised by the Anglophone Lawyers” in accord with the prime Minister’s confidential mail N ° 352 /CF/CAB/PM of January 5th 2017, which is aimed at setting up a training center to enhance the capacities of actors targeted on the implementation of comparative business law (OHADA and Common Law).
To involve the actors concerned in the design, elaboration and implementation of this program and with ken effective actions in respect to the actual and real needs of the targets, a workshop was held on 02nd of February 2017, from 9 am to 4 pm, under the chairmanship of the Governor of the Littoral Region, represented by the Inspector General of Services, Mr. NJIKAM ABOUBAKAR, in the multi-purpose hall of the Governor’s office in the Littoral Region.
With respect to the context, the workshop aimed at contributing to peace and social cohesion, following the submission of the revised Treaty and OHADA Uniform Acts to English-speaking judicial actors.
In this context, it seemed appropriate to hold this workshop given that the OHADA Permanent Secretariat had finalized and published the updated English version of the Uniform Acts and OHADA Treaty on 24th of November 2016. In the same light, on the 28th of November 2016, the Permanent Secretary of that institution, His Excellency Mr. Dorothé COSSI SOSSA, presented the final result recorded in the Special Edition of the Official OHADA Journal to the Minister Secretary General of The President of the Republic of Cameroon, Mr Ferdinand NGOH, representing the President of the Republic of Cameroon, His Excellency Paul BIYA.
In the chain of suitable solutions, the OHADA BUSINESS SCHOOL intervenes alongside the Cameroon Business Forum to accompany training…